Each Monday night, real estate investors from all across the United States and world are tuning into Note Night in America! For the last three years, Scott Carson, CEO of WeCloseNotes.com, and his tribe of note and real estate investors come together almost every Monday night for coaching and guest interviews. Scott helps his nation of note investors with specific subjects taking place in their real estate businesses like marketing, workouts, raising capital and finding deals. Since 2010, Scott has been helping investors close on thousands of real estate deals and has helped to coach and mentor the Who’s Who in the niche world of notes. Listen each week to his latest Monday night webinars to get the latest tips and tricks on making six figures and beyond in the world of distressed debt.

Having a rental business have its rewarding aspects with its passive income, but always having turn-over tenants can make it tedious. Pari Thiagasundaram experienced the same thing and wanted to make a rental business exit but still stay in the real estate. As a network engineer, he still needs to put in 40 hours a week in work, so dealing with his landlord duties just didn’t seem productive to him. With the Note Closers crew,
Read More

EP 216 – Don’t Give Up. Overcome Rejections With The Pitch Queen

Consistency and persistence, these two are any investor’s best friend if they want to close more deals and raise money. But being a woman and being young at that time, Michelle Weinstein always got it hard in a male-dominated industry before she became The Pitch Queen and most sought sales strategist. People kept telling her she was too young and she didn’t know how to sell, when it was one of the things she did
Read More

Every asset is a different case study whether it’s in Portland or Austin. It’s just a matter of figuring out a model and following that model so that you can manage what you can manage and make the note closing game work for you. Most note closers who have full time jobs find it difficult to stay consistent in the marketing, but Cody Cox found a way to keep the note closing wheel rolling instead
Read More

2017 is about to end and we’ve all hit goals we were shooting for when the year started. Now that your cups have been filled, find your cause driven goals, you charity or organization you want to be part of and fill start filling the cup of others. Don’t think that donating toys is a simple thing, because Scott Carson has filled ten carts full of toys to donate for the Toys For Tots. This
Read More

Helping ten thousand real estate investors buy their first notes in five years is one of the biggest goals for The Note Closers Show. In the coming New Year, Scott Carson is excited in going back to a bank-direct focus which will be leading to an event called Banking Blitzkrieg involving 20 note investors and a list of banks and asset managers. Scott asks his fans and followers to share their exciting 2018 goals, whether
Read More

Just start doing it and start getting your name or business out there. This advice from Tom and Tracy Hazzard is for people who are caught in the how-to cycle of building online credibility. Once you put that first couple of episodes out, you instantly start building credibility. The number of plays of an episode does count for success, but putting value in every episode that listeners can take away is more rewarding. Learn and
Read More

While there are a lot of strategies involved in closing notes, it is not a complicated business if investors take time to go out and educate themselves instead of planning everything right from the get go. Every note deal can go from a great performer to a foreclosure, and a foreclosure can end up to a modification. With the KISS method, there is no need to rush in to things and risk triggering unexpected results.
Read More

It is key for every entrepreneur to have an awareness of where the market and the economy is going, so that switching business strategies can mean taking advantage of what’s happening at the moment. Working with other companies to get the job done is one way of shifting gears quikcly. Tom Braegelmann of GCA Equity Partners believes that if everyone pulls in the same direction, then everyone can get to the next level with ease,
Read More

The one thing that separates people who are successful from people who want to be successful is consistency. The only thing that investors get from doing nothing or something later is failure. You may think that bouncing from one part to another is getting you somewhere, but it is actually ineffectively using time and efforts. Scott Carson’s belief is that building consistent success is essential. Follow-up like reaching out to asset managers, making more offers
Read More

Have a goal and focus on that to start making six figures in 2018. Put a cushion on your purchase price by focusing on assets worth $50,000 and not fix n’ flippers. Find out how owner occupied assets with high-rent rates and collecting back payments can earn you $250,000. Listen to the podcast here: A Note Closer’s Action Plan To Making Six Figures This episode is something that a lot of people are going to
Read More 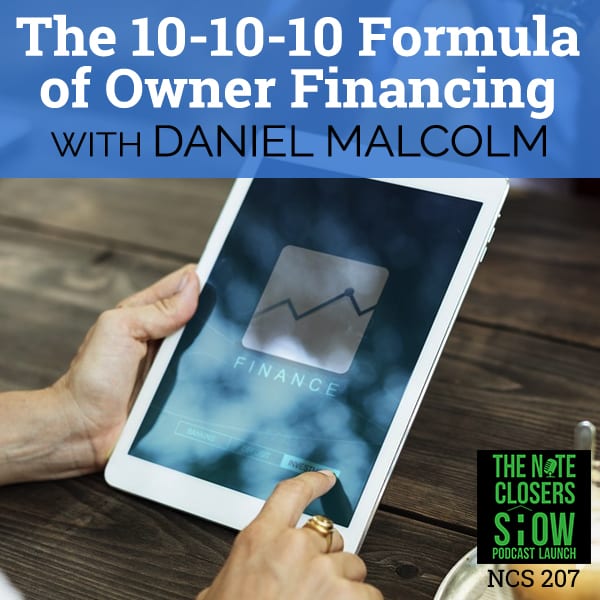 Note investors need to see themselves as the bank and think like the bank during deals that involve owner financing a property. Like banks, consider that big downpayments mean a big safety net. Take the risks that banks avoid and offer services they don’t. Learn more about credit scores, note brokering and the 10-10-10 formula with Daniel Malcom of The First National Bank of America. Listen to the podcast here: The 10-10-10 Formula of Owner
Read More

Earning big money to make your career look impressive is good, but having something meaningful that drives you to work hard is more rewarding. After his 17th Note Mastermind, Scott Carson encourages everyone to spend time and figure out where your destination is and what makes you want to go there. It could be helping 10,000 entrepreneurs to close deals or sending a nephew to finish college or giving your parents a great retirement life.
Read More